Courts are becoming modern but may leave many behind

An ambitious programme of reform

The UK stands on the precipice of legal reforms that will revolutionise the way that litigants interact with the justice system. Her Majesty's Courts and Tribunals Service (HMCTS) is implementing over fifty projects in a £1billion programme of reform  to "modernise and upgrade our justice system so that it works even better for everyone." Though disparate in scope and subject matter, each of these projects seeks to facilitate access to justice through the incorporation of 21st century tools  in the operation of courts and tribunals. For example, the reforms include video hearings, flexible court opening hours and digital case management systems. There will also be fall-back options such as telephone support for those that cannot use online systems.

One of the projects, Money Claim Online, enables individuals and businesses with straightforward debt claims valued below £10,000 to commence their cases on a government portal rather than the traditional method, a paper system. Since its pilot  phase began in March 2018, over 100,000 cases have been dealt with through the service and an initial evaluation of this system saw 80% of users report that it was "very good and easy to use."

The effects of the programme on access to justice are the subject of this post. The author is concerned that although the programme will make interactions with the courts easier for those that are likely to use them, there is a substantial proportion of the public that will never interact with the system at present and for whom different interventions should be designed.

The Justice Committee inquiry and the Bingham Centre's written submission

As our Twitter followers will have seen , these reforms were the subject of an inquiry run by the Justice Committee of the House of Commons earlier this year. The Committee were particularly interested in the effects that the proposed reforms would have upon access to justice, whether a sufficiently broad range of individuals had been consulted in relation to the reforms and whether the means by which the programme is evaluated are sufficient.

Along with Bingham Centre researchers Ellis Paterson and Dr Jack Simson Caird and former colleague Gemma McNeil Walsh, I co-authored a submission to this inquiry earlier this year. Our thoughts can be accessed here .

Our arguments sought to highlight that there are a number of barriers to access to justice and participation in the formal legal system that will not be addressed by the reforms. We also raised the need for parliamentary scrutiny of the sweeping changes that the reforms will create. Finally we argued that the reforms should be underpinned by best practice principles for the use of technology by government, as reflected by other groups such as the report of the House of Lords, Select Committee on Communications, 'Regulating in a digital world' .

The Bingham Centre has been active for many years in considering the practical requirements of access to justice as a core component of the Rule of Law. Whilst the Centre wholeheartedly endorses the modernisation of the antiquated British court system, we are concerned that these reforms do not fundamentally alter the wider economic causes of unmet legal need.

The 2010 and 2012 Civil and Social Justice Surveys run by Law for Life and Professor Pascoe Pleasence suggested that half of the population will suffer an actionable legal problem every 3 years. It has been suggested elsewhere that up to a million civil justice claims are not brought each year because people do not know that they have a legal problem. 2017 research  by the Solicitors Regulation Authority (SRA) corroborated these findings and found that: 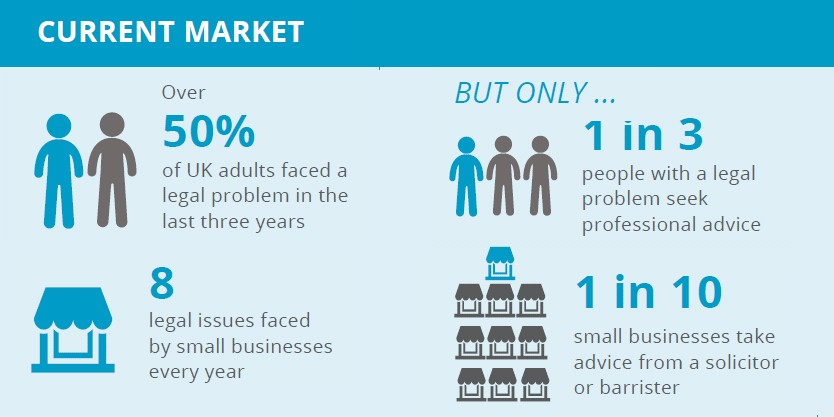 All rights reserved to the SRA

Furthermore an upcoming report  by the Legal Services Board will show that around a third of people possess low confidence when engaging with legal situations. These people were found to be more likely to be among those that don't get help when they need it and the most likely to end up with worse outcomes from litigation as a result of representing themselves. This group often disproportionately possess characteristics such as low levels of disposable income and relatively low levels of education when compared against those with high legal confidence.

Reading all of these studies together, it is clear that for a sizeable proportion of the public, economic and educational barriers prevent them from ever considering the possibility of seeking redress for legal problems even when they have an actionable legal dispute. This group could be described as 'having a low propensity to seek legal remedies' and there is very little in the reform programme that aims to create behavioural change amongst this group.

Law for Life and others tell us that there is a widespread dearth of legal capability across society; this is defined as the knowledge, skills and confidence to deal with law-related issues across society. The literature suggests that the scale of unmet legal need in England and Wales is severe. In order to equip citizens from all backgrounds with sufficient legal capability, they need to be provided with models of training, support and education that will enable them to develop those skills. This point is critical to our work as an organisation and a key aspect of our evidence.

The Justice Committee agreed to the logical force of this point and our view that legal capability is linked to equal access to justice was used to introduce the section of the report that spoke to these wider matters (see paragraph 51).

Behavioural economics provides a useful analysis for the reform programme. Programmes of policy reform are often described as aiming to increase "aggregate supply" or "aggregate demand." Supply side reforms typically aim to change the behaviour of those that are already engaged in a system; demand side reforms aim to drive more people to engage with that system. This has significant implications in the context of the reform programme.

Borrowing an example from the democratic citizenship sector is instructive. In 2014 the government introduced 'Individual Electoral Registration' an online process that enabled people to register to vote through their phones, laptops and computers; these were 'supply side reforms' aimed at making participation easier for those that wanted to vote, a group that could be described as having 'a high propensity to participate'.

Civil society groups found that the creation of an online system was not a significant draw to democracy for sections of the population that do not traditionally vote, for a series of reasons including disaffection with the political class. For those 'low propensity non-voters' organisations such as Bite the Ballot  and Operation Blackvote ran educational campaigns in disenfranchised communities to encourage participation in democracy, initiatives that increased demand for voter registration. These educational initiatives would thus be described as 'demand side reforms'.

The most crucial recommendation that the Committee put forward would introduce demand side reforms to complement the digitisation programme. At paragraph 61, the Committee asserts that "the government must acknowledge the role of public legal education" and that it "should make a commitment to piloting public legal education within its action plan for legal support, with a view to rolling out a national programme by 2022."

Although there are elements of public legal education present in the national curriculum and all schools are mandated to promote the Rule of Law as a Fundamental British Value, the reality is that very few students in the UK's schools are taught anything about the law whatsoever. The situation is even more stark outside of the formal school system. Other research  by Law for Life showed that only 11% of people accurately identify their legal problems. This recommendation would serve a crucial role in ensuring that every citizen, irrespective of their background or social capital, is able to participate in the legal system.

The points made above and in our submission are based on the Bingham Centre's considerable expertise in providing public legal education to thousands of young people in Britain's schools. The intervention of a national programme of public legal education is a complex one that we deem necessary to achieve attitudinal change. Without changing the behaviours of those who would never consider their problem to contain a cause of action, there are tremendous risks to our society.

Reflection on what is at stake is imperative; in writing the submission we were heavily influenced by the judgment of Lord Reed, speaking for the majority in the case R (Unison) v Secretary of State for Justice. Lord Reed outlined the profound consequences of an individual citizen not being able to access courts and tribunals. He suggested that had a certain Mrs Donoghue not been able to sue when she found a snail in her bottle of ginger beer at the Wellmeadow Café in Paisley, English (and Scots) law may not have recognised that we owe a duty of care to one another.

Thus the ability of the law to protect all groups within society requires those individuals to be appropriately supported and empowered to access courts and tribunals. To move individuals who would never think about entering the court system to the point where they are a prospective litigant, they require:

The knowledge that their problems possess a legal dimension

The confidence to act on that problem

The skills required to instruct a professional advisor or to research the information involved in respect of their situation.

It is for that reason that the Bingham Centre wholeheartedly endorses the recommendation of the Committee for the wholesale provision of public legal education for all and will continue working with the office of the Solicitor General to make that a reality.