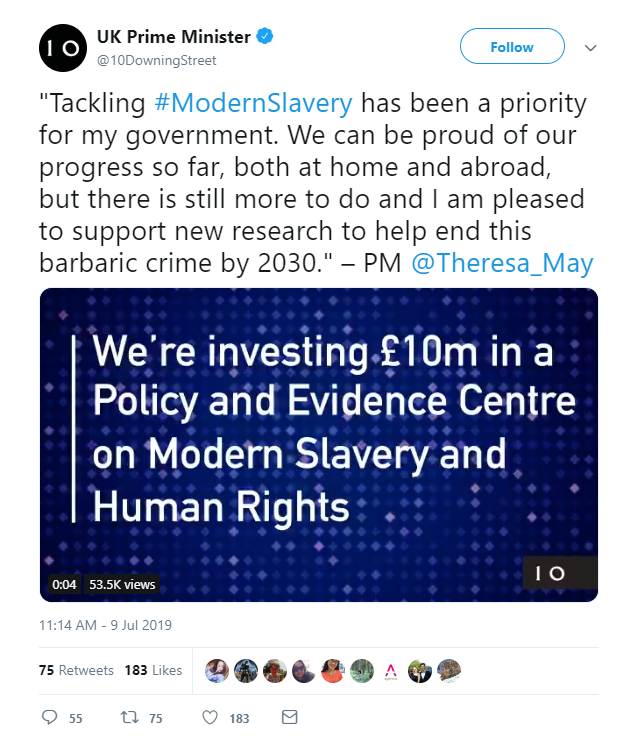 This week, the Prime Minister announced the investment of £10million of public funding from UK Research and Innovation's Strategic Priorities Fund to create an ambitious new Policy and Evidence Centre on Modern Slavery and Human Rights, to be led by the Bingham Centre. The job of the new Policy and Evidence Centre will be to bring about a step change in our understanding of modern slavery and to transform the effectiveness of the legal and policy framework which is designed to eradicate it.

The new Centre, which is the initiative of the Arts and Humanities Research Council ("AHRC"), in collaboration with other research councils, will bring together academics, policy-makers, businesses and charities to drive forward new studies, share knowledge, and improve collaboration both at home and overseas, to further strengthen our response to modern slavery. The multi-disciplinary Centre which the Bingham Centre will lead will be a consortium of universities and Independent Research Organisations with a track record in world class work on modern slavery. The other partners in the consortium are the Rights Lab at the University of Nottingham, the Wilberforce Institute for the study of Slavery and Emancipation at the University of Hull, the Centre for the Study of International Slavery at the University of Liverpool, the Bonavero Institute of Human Rights at the University of Oxford and the Alan Turing Institute, the national institute for data science and artificial intelligence, in London.

The Bingham Centre is delighted to be leading the new Centre because modern slavery is also a Rule of Law issue. The Rule of Law requires that everyone enjoys the equal protection of the law. But millions of people today do not enjoy the protection of universally agreed international legal standards prohibiting slavery. More detailed protective legal frameworks either do not exist, are too weak, or are not effectively enforced in practice. The scale and persistence of modern slavery is in part the product of Rule of Law weakness or absence. The PEC will be focused on how to deliver on the Rule of Law's promise by extending the law's protection of human dignity to everyone.

More information about the Centre can be found here  and we will shortly be publishing some FAQs about the new Centre.