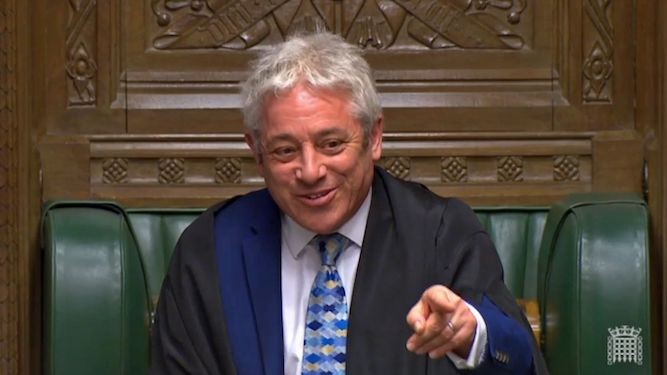 The stresses and strains to which Brexit is subjecting the UK constitution were much in evidence again this week. Debate continued to rage about whether the courts could be relied on to prevent Boris Johnson from carrying out his implicit threat to resort to Charles I's trick of dispensing with a troublesome Parliament. And, perhaps in anticipation of the summer silly season which is nearly upon us, the BBC gave credence to a most dubious story about a supposed plot by senior Conservative MPs to ask the Queen to go to Brussels to request an extension of time under Article 50.

Fortunately, Parliament made reliance on the courts or the Queen less likely to be necessary by itself dealing with the prorogation threat head on this week, amending the Northern Ireland (Executive Formation) Bill in such a way as to ensure that Parliament will be required by law to sit in September and October. As supporters of the amendments in both Houses pointed out, this assertion of parliamentary control over the Executive is an example of Parliament standing up for the Rule of Law, ensuring that the Government cannot render itself unaccountable by preventing Parliament from carrying out its constitutional function of scrutinising and having its say on arguably the most momentous question to be decided for generations: should the UK leave the EU without a deal? It is a basic principle of democratic governance in accordance with the Rule of Law that the Executive cannot prevent Parliament from sitting in order to deprive it of the opportunity to have a say on such a fundamental question.

The threat of prorogation having been dealt with by Parliament, attention now turns to whether, and if so, how, Parliament can express its view on whether there should be a No Deal Brexit on 31st October. These and closely related questions will no doubt arise during this year's Annual Bingham Centre Lecture, which we are pleased to announce will be given by the House of Commons Speaker, The Rt Hon John Bercow MP on 12th September on the subject

'Process of Discovery: What Brexit has taught us (so far) about Parliament, Politics and the UK Constitution'

The event will be held in Middle Temple Hall. More details to be announced shortly .