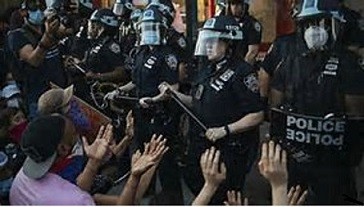 The year 2020 has seen more than its share of Rule of Law crises so far. The last ten days have seen protests and grief rock America following the death of George Floyd at the hands of Minneapolis police. The response by the President of the United States to these mass anti-racism protests raises significant issues for the Rule of Law.

In a Bingham Centre comment on these events, America risks confusing the Rule of Law with Rule by Law  our Research Fellow in Rule of Law Measurement Nyasha Weinberg examines the rhetorical use which President Trump and his Attorney General, William Barr, have made of the Rule of Law. Nyasha explores the difference between Rule of Law and Rule by Law, and the centrality of equality before the law to the Rule of Law. She argues that when citizens stop believing that those in power are subject to the law, this erodes trust, the credibility of government and confidence in law enforcement.