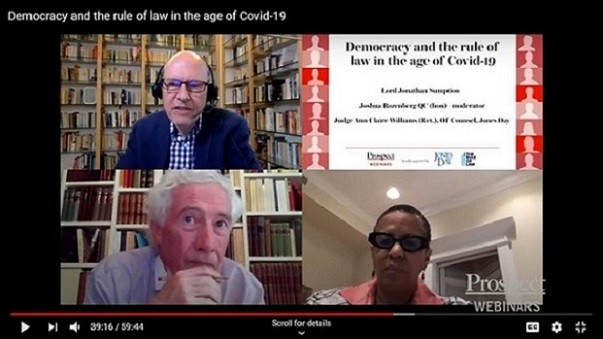 Former UK Supreme Court judge Lord Jonathan Sumption won plaudits  from libertarians this week when he revealed to Joshua Rozenberg that he had stopped complying with some of the lockdown regulations during the later stages of lockdown when they had become, in his view, "absurd".

The revelation was made during a public webinar on Democracy and the Rule of Law in the age of Covid-19  which was the result of a collaboration between the Bingham Centre and Prospect magazine, with the generous support of law firm Jones Day .

Lord Sumption has been a critic of many aspects of the UK's COVID-19 lockdown since it began in March. In this video interview, he questions whether the UK should have imposed restrictions as drastic and long-lasting as it did, given what he considers to be their disproportionate impact on education, business and free movement.

Lord Sumption argues that the Government should have done more to weigh the costs and the benefits of these measures given their severe impact on livelihoods and vulnerable groups, including the young. He queries whether the lockdown regulations were lawfully made under the Public Health Act and expresses doubt about whether there was a moral obligation to follow all aspects of the regulations particularly at a late stage of the lockdown. The public should, he argues, have stood up more robustly for traditional civil liberties and freedoms.

Read more of this dynamic dialogue in this last Update  before the summer break.  The Bingham Centre will be returning to those themes in the autumn.