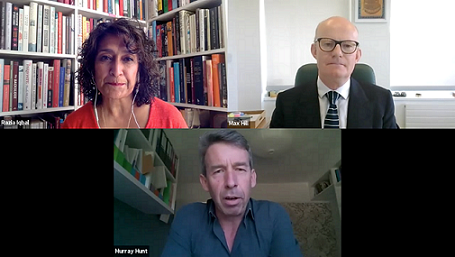 This week has been overshadowed by continuing controversy over the UK Internal Market Bill and its powers to legislate 'notwithstanding' international and domestic law, which claimed its first Cabinet-level resignation when the Lord Advocate of Scotland, Lord Keen of Elie QC, stepped down from his post.

Last week, our Director, Murray Hunt, wrote an op-ed for Prospect Magazine arguing that 'Parliament must tell this overreaching executive: "Not in our name" '. Yesterday, the Government published a statement indicating that it would use the 'notwithstanding' powers only in the context of a formal dispute  with the EU regarding the implementation of the Withdrawal Agreement. Our Brexit Research Fellow, Dr Oliver Garner, has produced an analysis of the Withdrawal Agreement's dispute resolution mechanisms  for the UK Constitutional Law Association blog. We are undertaking further analysis of the Rule of Law implications of the Bill in both domestic law and public international law, which will inform our engagement with the Bill as Parliament continues to debate it.

Meanwhile, we bring you news of a busy week of Bingham Centre events that has seen us host a Modern Slavery conference addressed by former Prime Minister Theresa May and other leading experts in the field, an interview with the Director of Public Prosecutions, Max Hill QC, and a panel discussion with leading civil society organisations working on legal awareness and regulation to combat online and data-based harms affecting young people, including racial bias in algorithms and gender-based violence and abuse.