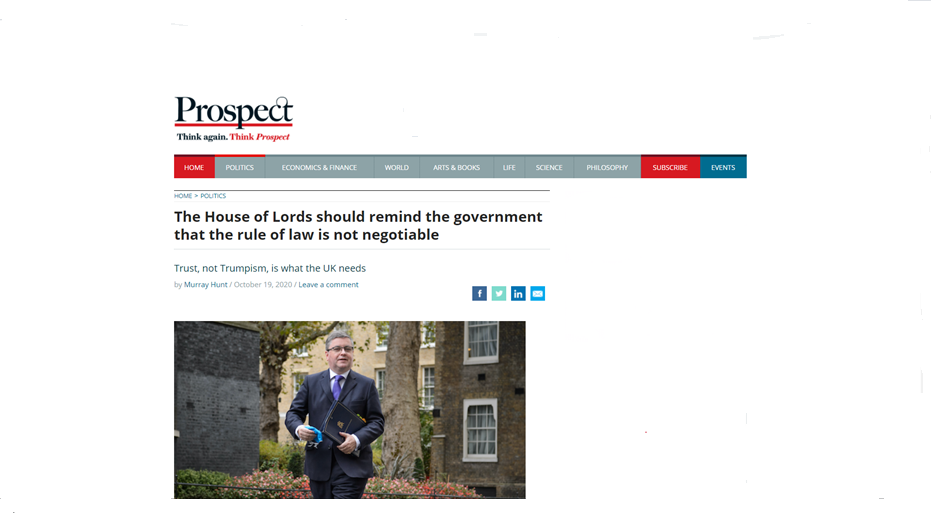 This week saw a powerful defence of the Rule of Law by the House of Lords, which inflicted one of the biggest defeats ever suffered by a Government in the upper House when it voted by 395 to 169 in favour of a motion regretting that the Government's controversial UK Internal Market Bill "contains provisions which, if enacted, would undermine the rule of law and damage the reputation of the United Kingdom."

The robust defence of the Rule of Law was led by Lord Judge, former Lord Chief Justice of England and Wales, whose speech  during the Second Reading of the UK Internal Market Bill should be required reading for anyone looking for a powerful explanation of why the Rule of Law matters.

By supporting Lord Judge's motion with such an overwhelming majority, the House of Lords has sent a powerful reminder to the Government that the Rule of Law is not negotiable, as our Director hoped they would in his Prospect piece  on Monday.

In our Report on the Bill for Second Reading in the Lords, we pointed out the Rule of Law problems raised by the relevant provisions in the Bill. In addition to being directly in breach of the recently agreed and implemented Withdrawal Agreement with the EU, the clauses also breach domestic law , and contain the mother of all ouster clauses , as Dr Ronan Cormacain points out in these blogs.