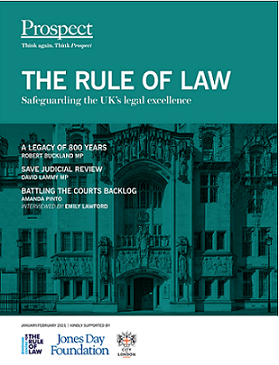 As the UK teeters on the brink of a No Deal exit from the European Union, amid growing signs of the significant damage that would cause to business and investor confidence in the UK and to the strength of its currency , we have collaborated with the City of London, our supporter law firm Jones Day and Prospect magazine to produce a new Report on the Rule of Law, published this week, which focuses on the importance to the UK economy of its international reputation as a global leader on the Rule of Law.

As the Report makes clear, the UK's worldwide reputation for its commitment to the Rule of Law and the stability and dependability of its legal system are essential foundations of the UK's continued economic prosperity. However, as our Director argues in his piece in the Report, The Rule of Law is a Living Culture , while the UK's Rule of Law culture has demonstrated its resilience, it cannot be taken for granted. It is a precious living thing which must be taken care of and rejuvenated by successive generations if it is to survive attempts by Governments to set it aside for short term political or transactional advantage, such as the UK Government's preparedness to legislate in deliberate breach of its international obligations in the UK Internal Market Bill, from which the Government at last resiled this week.