‘No jab, no job’? Employment law and mandatory vaccination requirements in the UK

This report forms part of the project The Role of Good Governance and the Rule of Law in Building Public Trust in Data-Driven Responses to Public Health Emergencies, a COVID-19 Rapid Response research project funded by the Arts and Humanities Research Council on behalf of UK Research and Innovation (grant AH/V015214/1).

The question of whether employees can be forced to get vaccinated, or more accurately, to show proof of vaccination to go to work, has become a heated one in the UK (and elsewhere ) in the second year of the pandemic. As lockdowns have eased, and workplaces (including public facing areas such as shops and hostelries) have opened up, it has become an increasingly crucial issue to know how best to keep these free of infection, prevent transmission to the vulnerable public, and simultaneously kickstart the economy, without the need for constant isolation by potentially infected workers.

The debate has morphed unpredictably as vaccination has moved from a distant hope to a present normality, at least in the developed West; as vaccinations have become more widely available to increasingly young age groups, and as guidance has been rolled out to encourage some groups excluded at the start, notably pregnant women, to 'get the jab'. Questions of individual liberty versus public safety have been hotly debated. Public opinion has ebbed and flowed, as have government pronouncements. A key worry has been that of sunsetting and scope creep; once vaccine passports are introduced as a public health measure, how easy will it be to stop them becoming a permanent ID card?

The employment debate is a subset of the general debate about the ethics, legality and practicality of vaccination passports.

The main findings of this report are as follows:

● The UK government can pass specific laws if it wishes to introduce vaccine mandates in particular sectors, but has to date chosen only to do so in the limited arena of care homes with future action planned for all NHS workers; however, this leaves it open to other employers to use them as they wish subject to general law. This voluntary use by employers, in the absence of clear government advice, will lead to uncertainty, division and a lack of public scrutiny.

● The technical infrastructure for proof of Covid-19 status has largely been put in place without legislative scrutiny. Full chamber parliamentary scrutiny has been non-existent in Westminster to date (although one short notice debate was held in Holyrood) and Select Committee opposition rejected out of hand.

● Scrutiny of the actual technologies used to certify and read vaccination status is particularly worrying in its absence. These apps impinge upon rights but detailed scrutiny is usually only possible by looking at source code or impact assessment documents (data protection, public sector equality duty, etc.) and requires specialist know how; in some cases, publication of these documents has been delayed, or public access denied. The internal development of apps is essentially not a public process and civil society only has access, given also opposition to FOI on policy grounds, by fiat of the government.

• Discrimination is the major area of concern in requiring employees be vaccinated. Vaccine passports are said to create a 'two tier society', and this may be particularly apparent in workplaces with a high number of the vaccine-hesitant individuals, often drawn from the socio-economically impacted and/or BAME workers.

• For employers, worry may arise from fact that indirect discrimination may occur if, even in good faith, a vaccination mandate reduces the number of workers or applicants from certain racial, ethnic or belief backgrounds. The legal test for the employer in such cases is to show whether it is 'a proportionate means of achieving a legitimate aim'.

• In the public sector the care home legislation in force in November 2021 claims, on unclear basis, to be exempt from discrimination challenge on grounds of age, disability, religion or belief. This claim is made in guidance, not primary or delegated legislation, and seems hard to substantiate. Rule of law issues also arise where, as here, guidance is mixed up with hard law.

● A full-scale vaccination requirement by a non-governmental employer is unlikely to be imposed outside of specific statutory exceptions or in a small number of workplaces where eg health or travel needs make it vital. The issues of unfair dismissal and possible discrimination claims, combined with the organisational issues of practical implementation and employee resistance, in a context of existing mitigations which are less problem-raising, will probably mitigate against widespread adoption by employers in the UK; but widespread uncertainty for both employers and employees and fears of discrimination are still likely. The situation may also change unpredictably as COVID rates change. 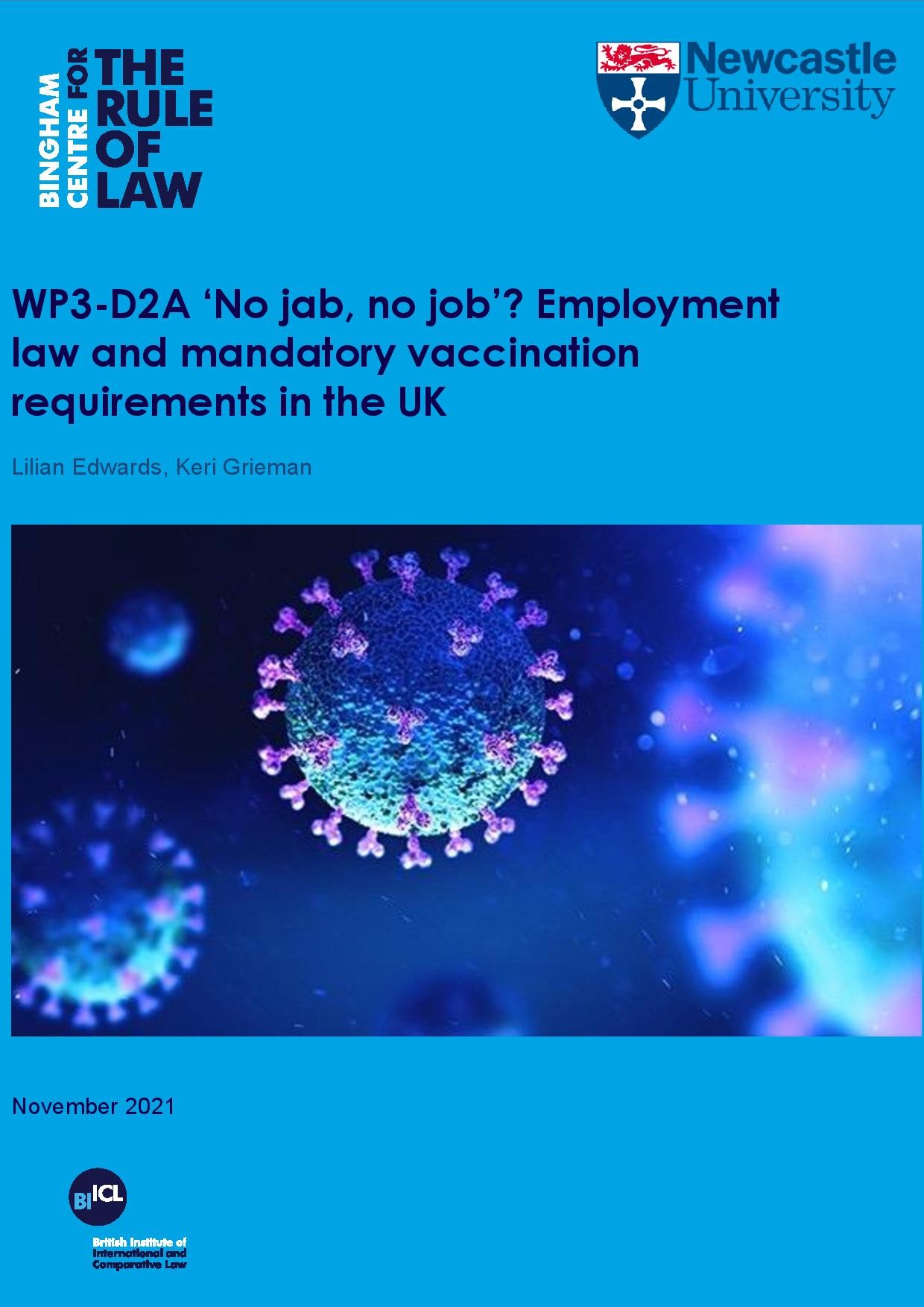