This Report sets out in brief the Bingham Centre's Rule of Law analysis of clauses 42 to 45 of the UK Internal Market Bill, to inform the consideration of those clauses by the House of Commons at the Bill's Report Stage on Tuesday 29th September.

The Secretary of State for Northern Ireland candidly admitted, before the Bill's introduction, that these clauses breach international law. However, the Government now claims differently. It seeks to argue that the clauses are merely a prudent step to create "a legal safety net" and to take "powers in reserve" which, if and when exercised, will operate to disapply international treaty obligations at the international law level.

The Government claims that this is the effect of its amendment, introduced during the Bill's committee stage in Committee of the Whole House, which would prevent the relevant clauses from being brought into force until the House of Commons has passed a resolution to that effect. This "parliamentary lock", the Government asserts, means that there is no breach of international law if Parliament enacts the Bill, it is merely providing for such a possibility in future if it becomes necessary, for example if the EU insists on an unreasonable interpretation of the WA/NIP.

The Report considers the Government's argument that MPs can vote for the Bill with a clear conscience because the mere enactment of the legislation does not involve any breach of international law, but concludes that this is legally incorrect.

It is correct that the Bill would authorise future breaches of international law by ministerial regulations which are yet to be made, but the Bill is also itself in breach of clear obligations which the UK voluntarily and very recently assumed in Articles 4 and 5 of the Withdrawal Agreement.

In Article 4 of the Withdrawal Agreement the UK agreed to ensure the direct effect and supremacy of relevant EU law and to do so by enacting domestic primary legislation ensuring that its judicial and administrative authorities have the powers to disapply inconsistent or incompatible domestic provisions.

The UK implemented that obligation by enacting s. 7A of the EU (Withdrawal) Act. This Bill reverses that implementation by disapplying s. 7A, leaving the UK in breach of Article 4 of the Withdrawal Agreement, because its domestic legislation now permits what the UK agreed to treat as directly effective and supreme EU law to be overridden by a mere resolution of the Commons.

The Government, by introducing such a measure going back on its implementation of the UK's Article 4 obligation, puts the UK in breach of its "good faith" obligation in Article 5 of the Withdrawal Agreement to refrain from measures which could jeopardise the attainment of the objectives of the Agreement; and Parliament, were it to enact the clauses in their current form, would also put the UK in breach of that obligation, as well as in breach of the Article 4 obligation to provide in primary legislation for the quasi-entrenchment of relevant EU law rights.

In clauses 42 to 45 of the Bill, therefore, the Government is not merely contemplating the possibility of future breaches of international law in circumstances which have yet to arise, but is asking Parliament to legislate in deliberate breach of the UK's international obligations.

The "parliamentary lock" introduced by the Government's amendment does not make any difference to the analysis: the fact that the coming into force of those provisions will be deferred pending a further resolution of the House of Commons does not alter the fact that Parliament is being asked by the Government to legislate in breach of its treaty obligations in the Withdrawal Agreement.

The nature of the breach of international law, and therefore of the Rule of Law, in this case is particularly stark. This is not a case of a provision in a Bill possibly or arguably being incompatible with one of the UK's international obligations. It is an explicit repudiation of the express terms of an agreement very recently entered into by the Government on behalf of the UK.

The essence of the Rule of Law problem with the Bill is that it threatens a breach of treaty obligations as part of a negotiating position in relation to a future agreement. The Rule of Law is not negotiable.

The consequences of such a repudiation of a clear international law obligation are very serious, including for the UK's reputation as a global leader on the Rule of Law and as an advocate for a rules-based international order.

MPs must ask themselves if their conscience allows them to support such an unprecedented request to authorise the clear repudiation of a treaty obligation to which the UK only recently agreed.

The question for parliamentarians is whether, whatever the position under UK constitutional law, they are prepared to take the unprecedented step of voting in favour of a deliberate breach by the UK of its international obligations under the WA.

The Report concludes that the only way to avoid that consequence, and therefore to avoid Parliament being implicated in a breach of the Rule of Law, is to remove these clauses from the Bill. 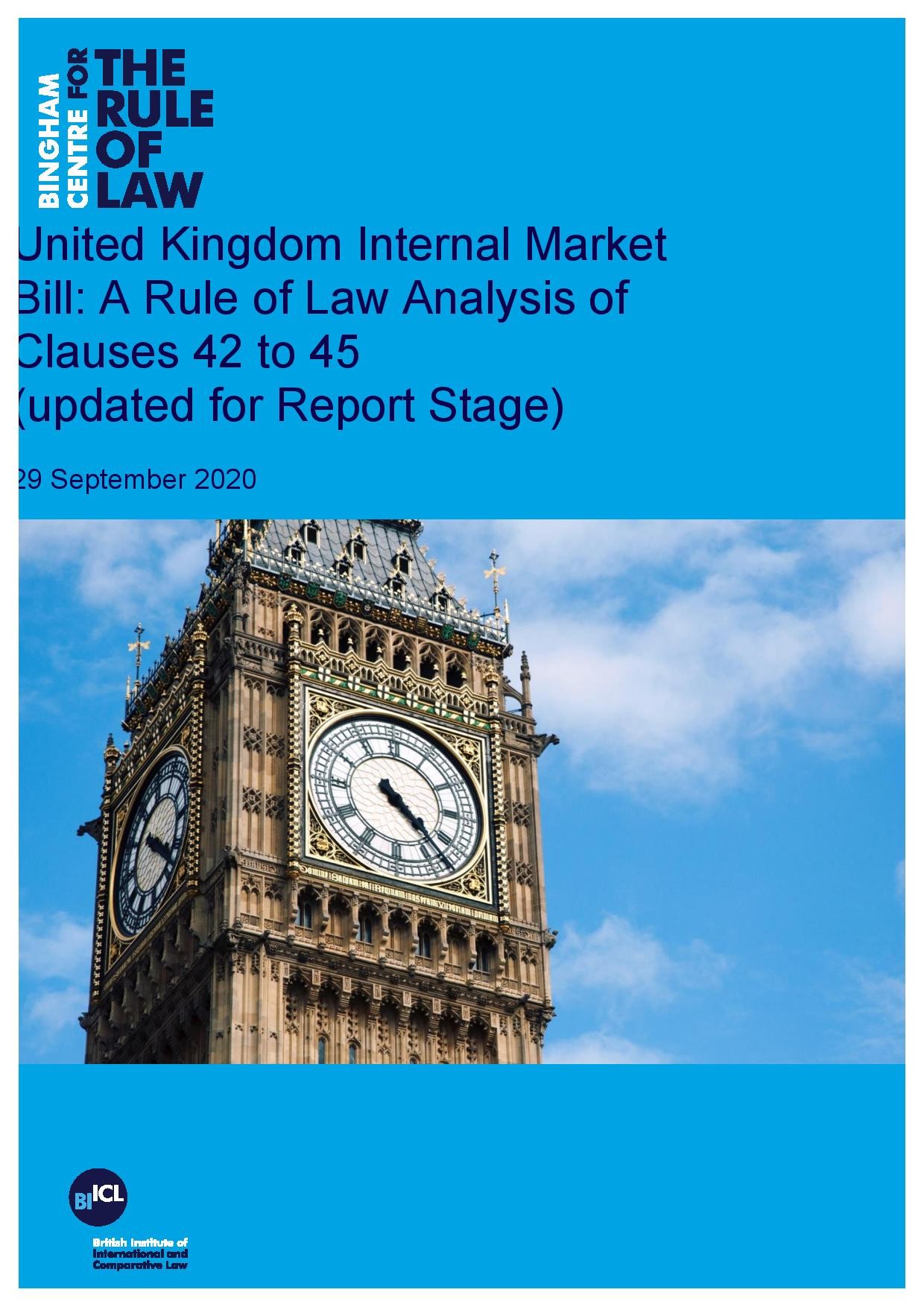