Waging War Against Corruption in Developing Countries: How Asset Recovery Can be Compliant with the Rule of Law

It is often said that criminals hardly ever mind financial penalties if they get caught, but on the other hand, they fear losing tangible assets. This is the underlying rationale for asset forfeiture approaches: forfeiting property can be a powerful detractor for crime and corruption. Assume that John was running a gambling operation or cooking drugs in a room he rented from a house belonging to a retired couple.

This case naturally raises a lot of questions (e.g. should the whole house be seized and forfeited, and if so, what would happen to the couple?) and brings into focus not only the process through which property can be forfeited, but also the kinds of protections that should be provided to John, the couple, and potentially even, the house. This example also foreshadows wider tensions that emerge between deprivation of property, due process protections, and the social imperative to fight crime and corruption.

Asset forfeiture laws are powerful tools provided to law enforcement agencies in their quest to tackle crime and corruption by seizing ill-gotten assets. Various legal mechanisms empower authorities to recover assets. One such approach, which is enshrined as a non-mandatory requirement in the United Nations Convention Against Corruption (UNCAC), relies on measures that allow confiscation of assets without a criminal conviction. This is typically referred to as Non-Conviction Based asset forfeiture (NCB or NCBF), also called civil forfeiture.

But the use of NCB is controversial. Absent some protections, NCB can be problematic insofar as it encroaches on property rights while relying on lower procedural safeguards and human rights protections than normally applies to criminal proceedings. These concerns are heightened in countries where transparency and accountability structures leave a lot to be desired, such as developing countries, and where there are few prospects that NCB forfeiture will be used impartially to recover the proceeds and instrumentalities of corruption. These concerns have also led to calls for NCB to be used in conjunction with higher standards provided in criminal procedures.

Using established methods of legal analysis, this Article shows that NCB has been applied in a manner that avoids undermining constitutional and human rights protections. Drawing on examples from South Africa, Namibia, Botswana, Colombia, and the Philippines, the paper shows it is possible to put due process and Rule of Law safeguards in place to ensure NCB does not raise such constitutional challenge. The paper thus argues that it is helpful to frame NCB forfeiture in Rule of Law terms, because safeguards help ensure the long-term legitimacy and efficiency of asset forfeiture systems. But it is important to acknowledge there may be challenges to the implementation of these safeguards, as the analysis shows. Some of the more important challenges are considered, including the concept of 'political will', tensions between human rights and anti-corruption obligations, court systems and judicial independence (or lack thereof), and property rights protections.

The Article is structured as follows. After the introduction, a brief overview of asset forfeiture and NCB forfeiture mechanisms is provided. The paper then reviews how NCB is implemented in practice across some of the case studies. It then goes on to discuss the due process and Rule of Law concerns that NCB forfeiture raises and argue that strong Rule of Law safeguards (such as robust judicial structures and rights protections) are needed to mitigate these risks and guard against abuses. To illustrate these points, the Article reviews specific safeguards that developing and transitioning countries have put in place in NCB systems, such as the application of proportionality tests, compensation, measures to mitigate adverse impact in reverse onus provisions and to protect against self-incrimination, the right to appeal as well as other fair trial measures. The paper ends with a discussion of the challenges for a Rule of Law compliant NCB system.

The project report provides a comprehensive analysis of the rules regulating the threat or use of force between States in international law and examines how these rules operate specifically in the context of territorial disputes. The report analyses a wide range of territorial disputes to clarify the legal obligations binding upon States involved in such disputes and the consequences flowing from a breach of these obligations.

Click on the image (top right) to download the paper. You will be redirected to an external page. 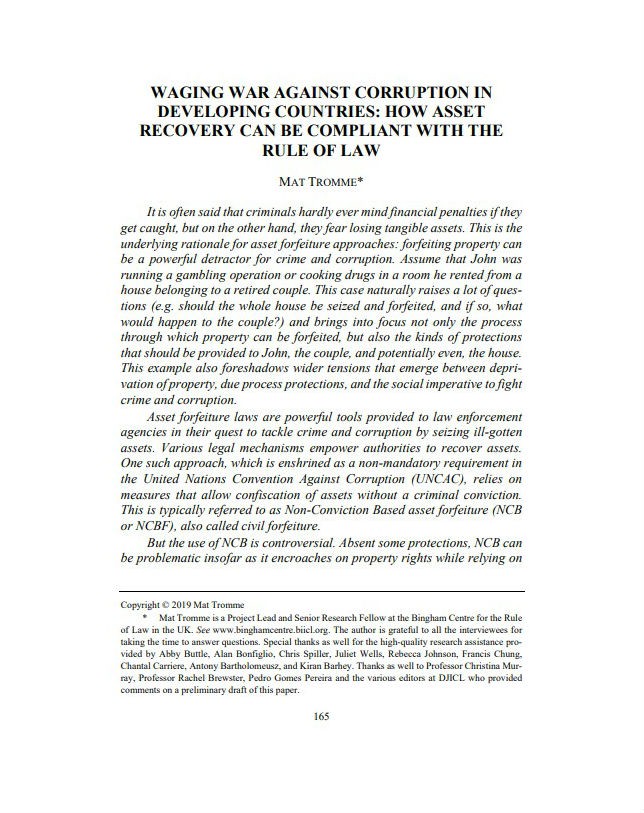