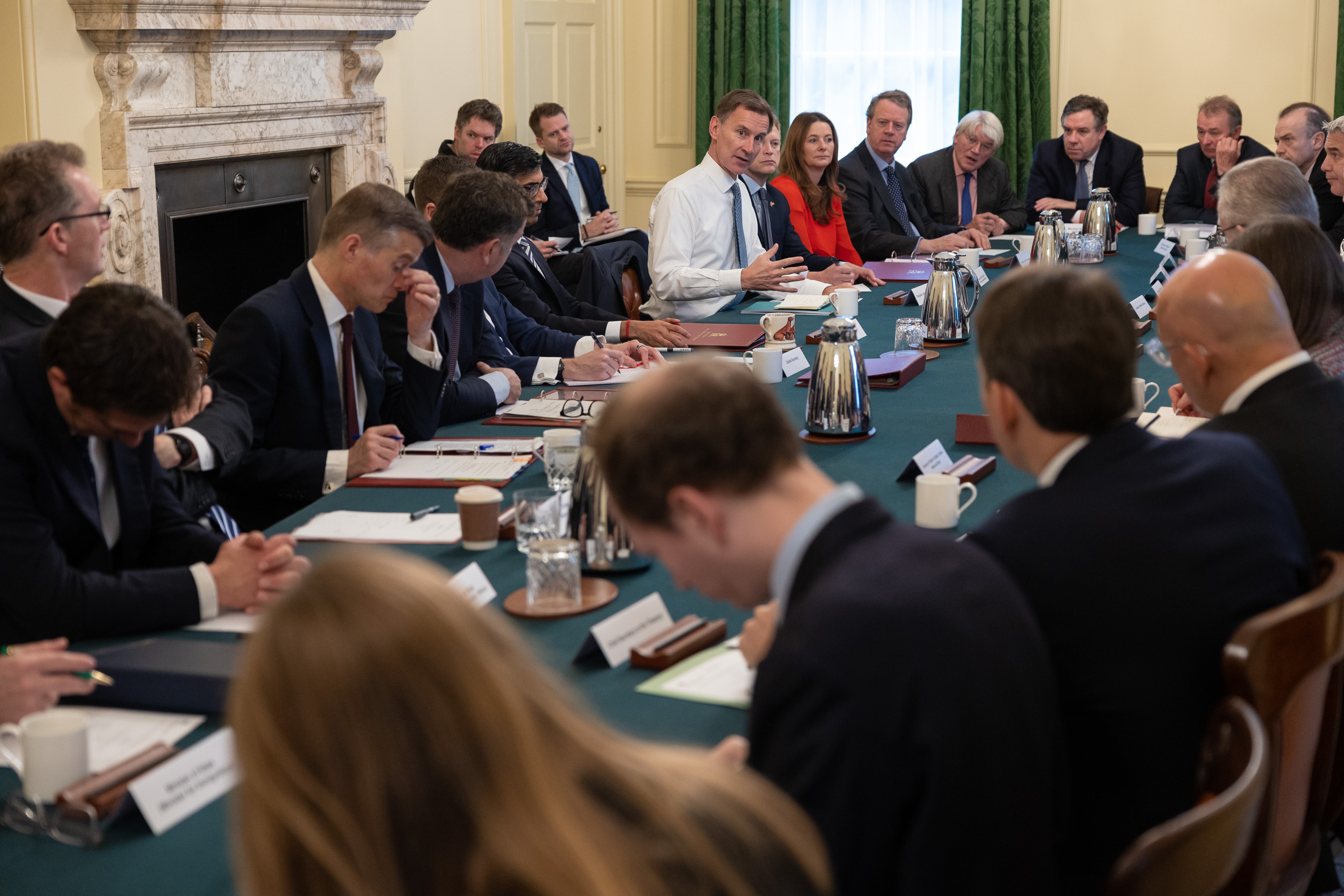 Image: The Chancellor of the Exchequer Jeremy Hunt briefs the Cabinet before he delivers his Autumn Statement (budget) to Parliament. Photo by HM Treasury, reproduced under Creative Commons licence.

The UK Government presented a budget and multi-year spending review yesterday that aimed to improve the country's public finances by restoring its credibility in sovereign bond markets after September's disastrous "mini-budget". In contrast to September, the Government allowed the independent Office for Budgetary Responsibility to publish its own assessment of the budget's impact on the economy, and there has been no recent talk of intervening in the Bank of England's independent process for setting monetary policy.

Respect for the role of these independent economic institutions is welcome. But there are other ways in which the Government could act to improve the UK's economic prospects. As our Director Murray Hunt argues in a piece published this week, Prime Minister Sunak should reconsider the attacks on a wider range of institutions under recent Prime Ministers and show some of the Rule of Law leadership that is a crucial part of our international reputation.

Murray's piece, which drew an immediate response from legal commentator Joshua Rozenberg, is a sobering reminder both of the damage that has been done, and what is still in the works: including Bills which the Bingham Centre has been examining, such as the "Bill of Rights" Bill, the Northern Ireland Protocol Bill and the Retained EU Law (Revocation and Reform) Bill. The last of these Bills was introduced under the short-lived Truss administration and threatens to subject a large area of EU-derived law to massive legal uncertainty and sweeping Executive law-making powers. Our Maurice Wohl Research Leader in European Rule of Law, Dr Oliver Garner, has co-authored written evidence to the House of Commons committee currently scrutinising the Bill, which we hope to publish in our next Update newsletter.

Murray observes that even if these Bills are dropped or substantially improved, the "rot in the fabric of our Rule of Law institutions runs much deeper than this." On the international stage, the UK has already repeatedly signalled that it would deliberately breach binding treaty obligations. Another troubling development, which has received little attention in mainstream public debate, is a change in the approach which the UK Government requires its own lawyers to take in determining "legal risk" - that is, the probability that a Government decision will be successfully challenged in court. One of Suella Braverman's last acts as Attorney General, before she moved on to become Home Secretary, was to issue new guidance insisting that decisions should not be flagged as unlawful if a "respectable" legal argument could be mounted to defend them in court. This is a low bar: a respectable legal argument is defined as any argument that counsel "could properly advance", and the accompanying chart indicates that this includes situations with an estimated likelihood of the Government losing its case that exceeds 70%. As Murray says, this guidance appears "designed to loosen legal constraints on ministers in a hurry".

In recent weeks, Murray has participated in on-going expert discussions convened by the OSCE Office for Democratic Institutions and Human Rights on international standards for good law-making processes, and has spoken about the Bingham Centre's work at the "Championing a High Standards UK" conference, organised by the Human Rights Consortium Scotland, the Northern Irish Human Rights Consortium, the Wales Civil Society Forum and the UK Civil Society Alliance.

This Update also brings you news from our independent commission on public health emergency powers, a conference presentation on access to justice for children, a new book on state responsibility by a former colleague, and the latest news from the Modern Slavery and Human Rights Policy and Evidence Centre, which the Bingham Centre leads. You will also find details of the latest training courses offered by the British Institute of International and Comparative Law (BIICL), of which the Bingham Centre forms a part.