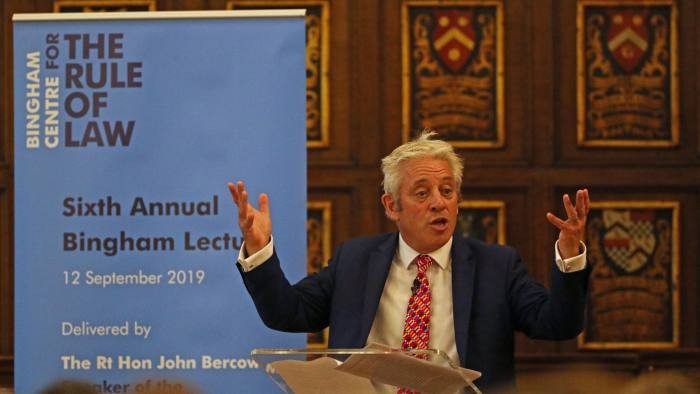 On 12 September, the Speaker of the House of Commons, the Rt Hon John Bercow MP gave the Sixth Annual Bingham Lecture in Middle Temple Hall. The Speaker's Lecture was titled: 'Process of Discovery: What Brexit has taught us (so far) about Parliament, Politics and the UK Constitution'.

The Speaker's lecture was live streamed and footage is available here . The lecture was covered by the Guardian, ITV news, the BBC, the Huffington Post and the Financial Times.

The Speaker's lecture made three main arguments. The first was that the House of Commons' power over the executive, which has been so evident over recent months, was not the product of Brexit or minority government but was instead the result of a revival of the House of Commons which began after the expenses scandal. The second was in relation to Brexit and the Benn and Letwin Act passed by Parliament on 10 September. The Speaker explained that as a result of the passage of the Act there were now only three possible Brexit outcomes before 31 October (a deal, no deal or an extension) and that each outcome required the positive endorsement of the House of Commons. No Brexit outcome could occur by default without the Commons taking a decision to support it. In relation to the Benn and Letwin Act, the Speaker emphasised that there was no question that the Government could ignore the clear requirements of the legislation, and explained that he would do anything that was required, in procedural terms, to ensure that the legislation was complied with. The Speaker's third argument was that recent events had indicated that there may now be a strong case for codifying, in legislative or constitutional form, some of the rules regulating Parliament's role in relation to the executive.