The Appointment of Judges by Independent Commissions in the Commonwealth

One of the most sensitive tasks in a constitutional democracy is the selection and appointment of judges. In contrast to the frequently confrontational US processes, or the 'tap on the shoulder' by a government minister that was the norm for so long in the UK and its former colonies, a 'third way' of appointing judges has become strikingly popular. This is to entrust the task to an independent Judicial Service Commission or Judicial Appointment Commission with a broad membership that typically includes judges, lawyers and lay representatives. By 2015, more than 80% of Commonwealth member states had established such bodies, according to Bingham Centre research.

Responding to a period of intense debate about the work of South Africa's Judicial Service Commission, which had been existence for nearly 20 years, an international research project was established to examine the selection processes and practices of such bodies in the Commonwealth in more depth. The project brought together experts from a number of the larger Commonwealth jurisdictions where commissions have some role in the selection of judges. It was led by Bingham Centre Fellow, Professor Hugh Corder of the University of Cape Town Law Faculty, and was carried out by the University of Cape Town in collaboration with the Bingham Centre. The work was generously funded by the Claude Leon Foundation.

1. The Cape Town Principles on the Role of Independent Commissions in the Selection and Appointment of Judges (also available in Bulgarian, Burmese, Portuguese and Spanish translation)

2. Securing Judicial Independence: The Role of Commissions in Selecting Judges in the Commonwealth

Published in 2017 in South Africa by Siber Ink, this volume was edited by Professor Hugh Corder of the University of Cape Town, and Dr Jan van Zyl Smit of the Bingham Centre for the Rule of Law. The book brings together essays on the judicial selection practices in Canada, England and Wales, Kenya, Malaysia, Nigeria and South Africa. These essays are based on papers presented by country experts at the project workshop in Cape Town. Extensively revised, they provide the scholarly foundation for the Cape Town Principles, which are reproduced in the book together with a brief commentary and reflections on the process by which they were developed.

Securing Judicial Independence is published under a creative commons licence and available for free download here. 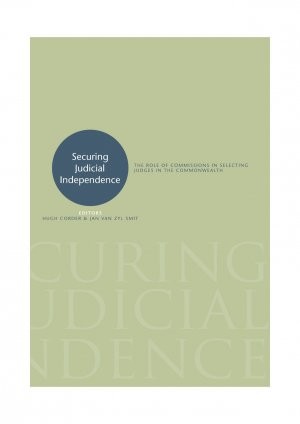