Judicial Review and the Rule of Law: An Introduction to the Criminal Justice and Courts Act 2015, Part 4

Judicial review is a legal process by which individuals can challenge decisions made by public authorities on the basis that they are unlawful, irrational, unfair or disproportionate. It is a directly accessible check on abuse of power, a means of holding the executive to account, increasing transparency, and of providing redress when public agencies and central Government act unlawfully. In a country without a written constitution, it plays a particularly important role.

The Criminal Justice and Courts Act 2015 reforms the arrangements for the funding of judicial reviews, the power of the court to refuse to hear claims and makes provision for the disclosure of information about individuals and organisations which fund judicial review. These changes must be applied in a manner which preserves the effectiveness of judicial review as a crucial constitutional tool which allows individuals and organisations to hold Government to account. Interpreting the Act in a manner consistent with its purpose and with the rule of law should preserve effective access to the court in practice.

The Bingham Centre for the Rule of Law, JUSTICE and the Public Law Project have produced a full introduction to the Act and its interpretation, aimed at lawyers and judges approaching it for the first time (Judicial Review and the Rule of Law: An Introduction to the Criminal Justice and Courts Act 2015, Part 4, October 2015). This paper provides an accessible summary of that work, principally designed for use by civil society organisations who work with judicial review (all paragraph references are to Judicial Review and the Rule of Law) 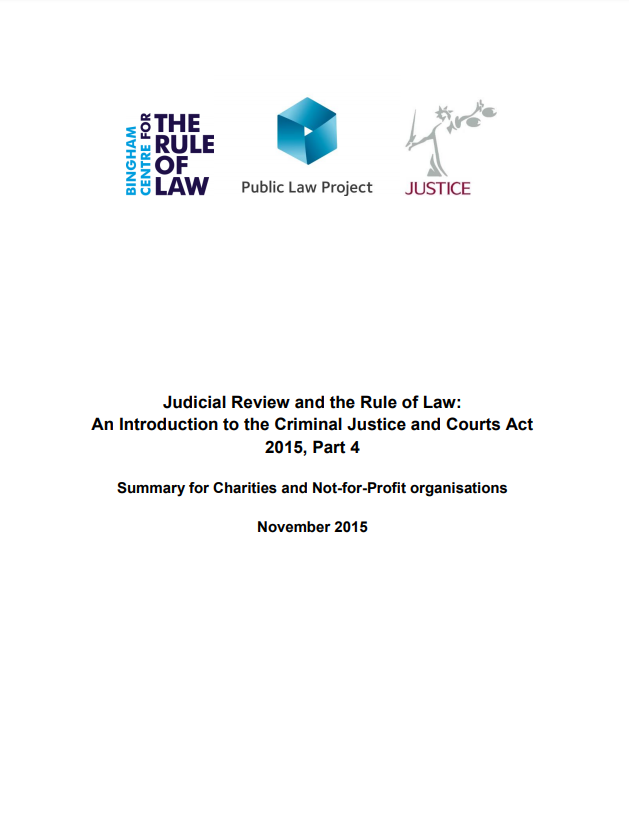