This Report sets out the Bingham Centre's Rule of Law analysis of the Terrorist Offenders (Restriction of Early Release) Bill, to inform the House of Commons' consideration of the Bill on Wednesday 12th February. The Bill has been introduced as "fast-track legislation" (ie. an emergency Bill) and will complete all its Commons stages in a single day.

The Report analyses the Bill from the perspective of Rule of Law principles, as recognised at common law and in relevant international standards which are in part based on the UK's common law tradition and by which the UK has chosen to be bound. It identifies the most significant Rule of Law issues raised by the Bill and analyses those issues in the light of the relevant Rule of Law standards.

The Rule of Law requires adequate legal protection of fundamental rights, including where threats to those rights come not from the State but from other individuals such as people plotting terrorist attacks. In the wake of two terrorism-inspired knife attacks by recently released offenders, the Government is therefore right to have considered the adequacy of the current legal framework protecting the life and safety of members of the public from individuals who are known to pose a terrorist threat, and to bring forward legislation to improve that legal protection to the extent that it is found wanting. That legislation must itself be compatible with the Rule of Law. 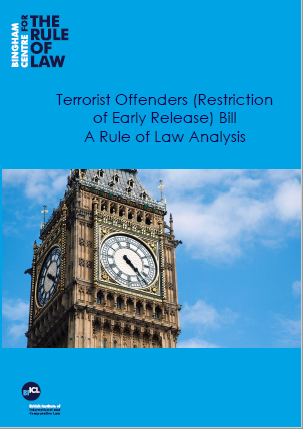