Under the Bill, where conduct took place more than 5 years ago, prosecutions are only to take place in exceptional circumstances. This undermines the Rule of Law principle of legality - the basic idea that we are all subject to the law, no matter our position in society.

The restriction on civil claims (i.e., a claim for damage) against service personnel and the Ministry of Defence likewise places certain classes of people above the law and undermines the principle of legality.

Looked at from the perspective of victims, this Bill makes it much harder for them to access justice. The only crimes excluded from the ambit of these restrictions are sexual crimes, meaning that murder, torture and other grave war crimes face substantial legal barriers before there can be a prosecution. This breaks the ancient promise of Magna Carta that "We will sell to no man, we will not deny or defer to any man either Justice or Right".

The Bill breaches the long-standing principle of military law that soldiers are subject to the same laws as ordinary citizens.

The Bill contains an exception for crimes committed against British soldiers. This is the opposite of equality before the law where "our" victims have more rights than "their" victims. This lack of fairness is continued in the Bill where only those factors which tend against prosecution are to be given particular weight, but no reference is made to the weight to be given to factors which favour the rights of victims.

The Bill grants a veto on prosecutions after the 5 year mark to the Attorney General. This undermines the value of our independent prosecution service and introduces a risk of political interference in what should not be a political decision.

Failure to properly investigate and prosecute murder and torture risks breaching our domestic and international obligations to protect the right to life, to ensure freedom from torture and to provide an effective remedy for breach of human rights.

The provision in the Bill which requires the Government to consider derogating from the European Convention on Human Rights is legally meaningless and only has rhetorical value.

The Bill undermines our obligations under the Geneva Conventions and the UN Convention Against Torture to investigate and prosecute grave breaches of international humanitarian law. It propagates the dangerous idea, recently attempted in the UK Internal Market Bill, that the UK can simply set aside international law. What is, in effect, a statute of limitations on the prosecution of war crimes, makes it much more likely that British soldiers will be prosecuted by the International Criminal Court -that Court only acts where countries are unwilling to prosecute their own citizens.

The Bill contains a Henry VIII clause granting Ministers the power to amend Acts of Parliament.

The UK has a long and proud reputation of decisive action against war crimes. This Bill weakens that reputation. It makes it harder, not easier to stamp out abuses that our own troops have committed. We do not protect British troops and British values by hiding from the truth or acting with impunity. 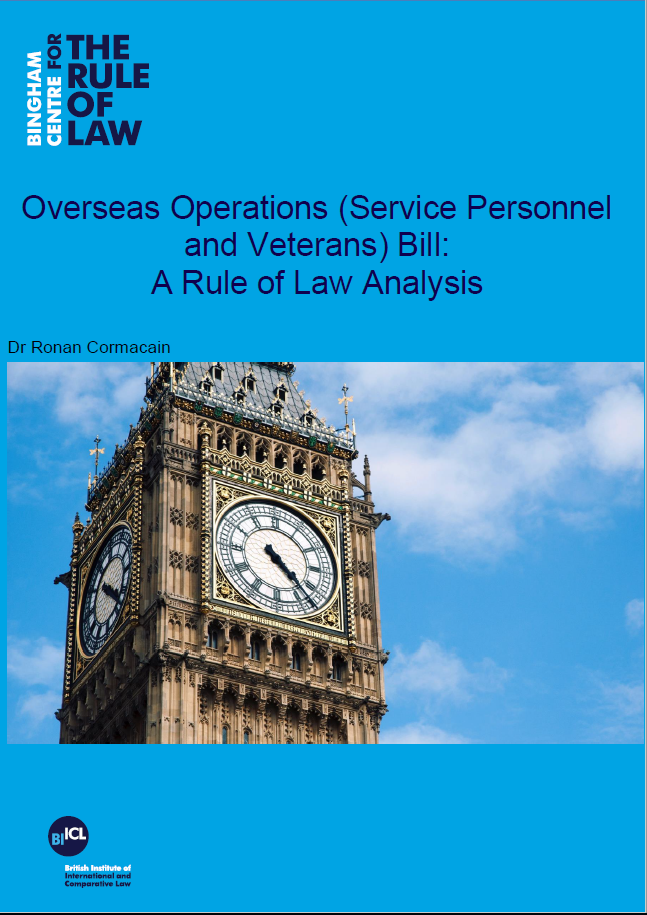