A Bill which set out drastic changes to the tenure, disciplinary system and operating procedures of the Supreme Court was introduced by the Polish government in July 2017 and rushed through most of its legislative stages in a matter of days. This action sparked large-scale public protests before the President of Poland referred the Bill back to the legislature for reconsideration. The Director of the Bingham Centre, Murray Hunt, was one of a group of experts invited to analyse the Bill by the Legislative Support Unit of the OSCE Office for Democratic Institutions and Human Rights (ODIHR), in response to a request from the First President of the Supreme Court of Poland. Murray Hunt and Jan van Zyl Smit, an Associate Senior Research Fellow of the Centre, produced an analysis of the Bill's key provisions in the light of international standards of judicial independence, including standards which the Bingham Centre had assisted in developing such as those contained in the Venice Commission Rule of Law Checklist and the Cape Town Principles on judicial appointments.

The OSCE-ODIHR Opinion, to which the Bingham Centre submission made a substantial contribution, identified several areas in which the Bill fell short of international standards. The compulsory retirement of the entire Supreme Court bench, subject to an Executive discretion to retain individual judges was found to be inherently incompatible with the fundamental principle that judicial independence requires security of tenure. The Bill also violated judicial independence by entrusting the Executive with a high degree of control over the nomination of replacement judges and new members of the Supreme Court. Its proposed system for the disciplinary prosecution of judges, under the ultimate authority of the Minister of Justice, was similarly flawed. The ODIHR Opinion identified further breaches of international principle in the power given to the Executive to determine the rules of procedure of the Supreme Court and the number of judges. The enforced removal and replacement of the First President of the Court, a lowering of the Supreme Court retirement age and the earmarking of female judges for optional early retirement were also criticised in light of international standards of judicial independence and gender equality, which includes the need to avoid stereotyping. Although some problematic provisions of the Bill were modified before it was passed, the provision on lowering the age of retirement was nonetheless found to be in breach of EU law by the Court of Justice, and further challenges to the Supreme Court Act are still pending before that court.

You can read the Opinion here 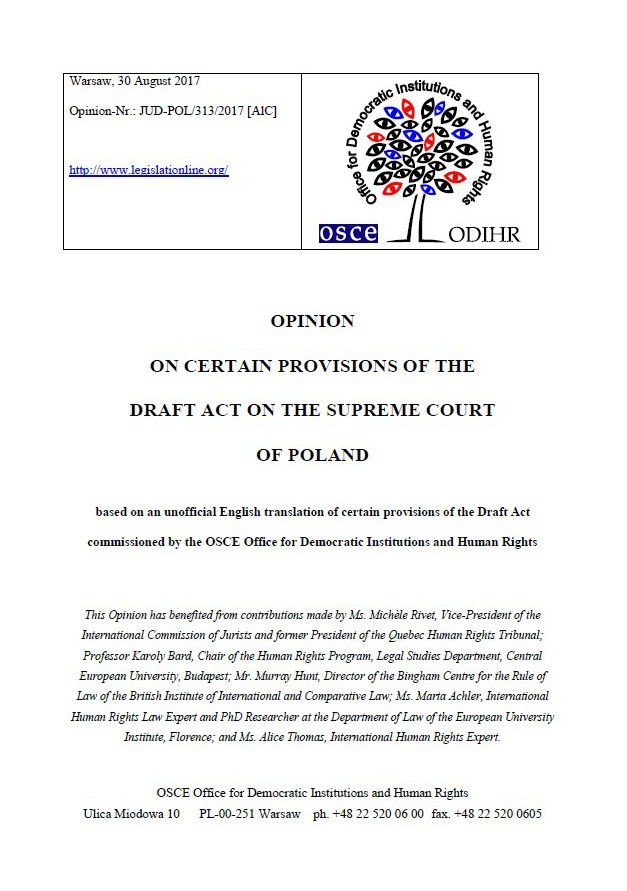