The Overseas Operations (Service Personnel and Veterans) Bill restricts prosecutions of service personnel and restricts legal claims against the Ministry of Defence. Commons consideration of the Lords amendments to the Bill takes place on 21 April 2021.

Lords Amendment No. 1 ("the Robertson amendment", proposed by former Secretary General of NATO and UK Defence Secretary Lord Robertson) removed the presumption against prosecution for torture, war crimes, crimes against humanity and genocide. This amendment mitigated some of the Rule of Law defects in the Bill and is to be welcomed from a legal, military and pragmatic perspective.

The Government proposes an amendment in lieu of Lords Amendment No. 1. The proposed Government amendment will remove the presumption against prosecution for torture, crimes against humanity and genocide. However, it will retain the presumption against prosecution for war crimes. War crimes include some of the most grievous crimes on the British statute book. To date, the Government have offered no justification as to why torturers should not be protected, but those accused of war crimes should be protected. The Government says that the purpose of its amendment in lieu is "to reassure Peers of our pledge to the rule of law". But exempting war criminals undermines the Rule of Law and should not be supported.

Furthermore, as war crimes are within the jurisdiction of the International Criminal Court, the amendment also fails to achieve one of the main aims of the Robertson amendment which is to protect UK troops from the risk of prosecution before the ICC. The Commons should reject the Government's amendment in lieu and agree to Lords Amendment No. 1.

Lords Amendment No. 4 ("the Tunnicliffe amendment") removes the 6 year time limit on civil claims against the Ministry of Defence, but only where the claimant is a member of the armed forces. Although a laudable aim, granting one class of persons an exemption not enjoyed by others is clear discrimination and this has been rightly recognised by the Government.

However, rather than widening the exception in Lords Amendment No. 4 so that it applies to all, the Government instead invites the Commons to disagree with the Lords Amendment so that everyone suffers. Rule of Law principles indicate that everyone should have access to justice and that there should be no absolute time limit to bringing civil claims against the Ministry of Defence. The Government should have proposed an amendment in lieu of Lords Amendment No. 4 removing the unjustifiable discrimination to which it gives rise. 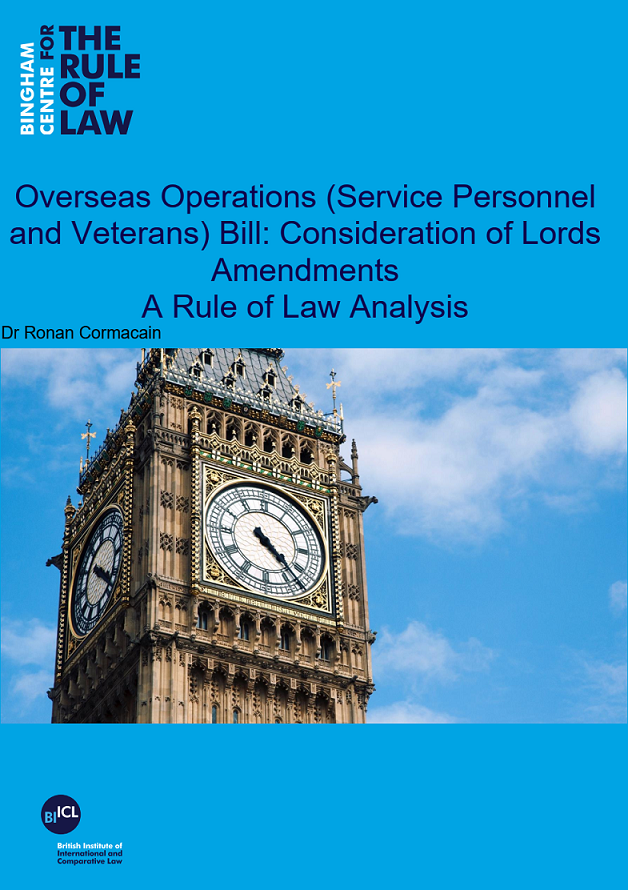