The Coronavirus Bill is a response to a genuine public health emergency and contains the most sweeping powers ever taken by the UK Government outside of wartime. There is absolutely no doubt that the Government needs to take swift and bold measures to protect citizens, and that some of these measures will unavoidably impinge upon personal liberties in a drastic way.

The role of Parliament in scrutinising these measures is even more important during an emergency. Neither law nor Parliament should fall silent in the war on Covid-19. Parliament will need to be satisfied of the necessity of these measures.

This Report focuses on two fundamental areas of concern.

(1) the two year duration of the Bill

(2) mechanisms for reporting to Parliament

At the time of writing it is being reported that the Government will table an amendment to the Bill which will replace its proposed two year duration with a limit of 6 months, unless renewed by Parliament. The Bingham Centre would welcome such a Government amendment to the Bill as being necessary to bring it into line with international standards and best practice on emergency legislation.

In our view, a two year duration is too long. It goes against the grain of our existing domestic law. The Civil Contingencies Act 2004 allows for the making of emergency regulations, but those regulations expire after 30 days. The Prevention of Terrorism Act (Temporary Provisions) 1989 lapsed after one year unless Parliament extended it. It goes beyond durations of emergency measures taken by other Governments around the world. It goes against international standards which require that emergency measures only be adopted for strictly so long as are necessary.

The Bill already contains powers to shorten and extend its duration. It can be extended if a draft statutory instrument is laid before and approved by resolution of Parliament. It can also be extended without recourse to Parliament, but that extension lapses unless approved by Parliament within 40 days.

We recommend that reports to Parliament must contain more details. For example, reports could also contain the following information

We recommend that there is greater Parliamentary scrutiny than Parliament simply taking note of the report once a year, and that consideration is given to creating specific scrutiny arrangements, such as an ad hoc joint committee of both Houses of Parliament, to oversee the operation of the emergency legislation.

There is no requirement in the Bill for the devolved jurisdictions to receive reports or scrutinise the operation of the Bill in their jurisdictions. We recommend that reporting mechanisms equivalent to those for the Westminster Parliament be introduced for the Scottish Parliament, the Welsh Assembly and the Northern Ireland Assembly.

Finally, the Government will need to explain to the satisfaction of Parliament why it is necessary to have this Bill rather than simply using existing powers in the Public Health (Control of Disease) Act 1984, or the Civil Contingencies Act 2004. 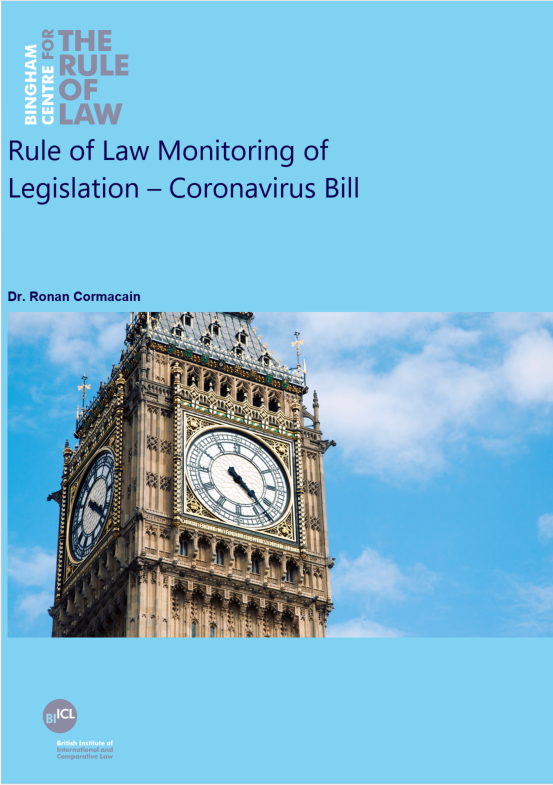