Written evidence submitted to the House of Commons European Scrutiny Committee inquiry: The institutional framework of the UK/EU Trade and Cooperation Agreement

This written evidence  has been re-published on the Bingham Centre website with the kind permission of the House of Commons European Scrutiny Committee .

The TCA Partnership Council (PC) has the power to make legally binding decisions, and to oversee implementation and application. The Specialised Committees have the power to assist in this function. This extends to the development of the TCA in areas such as mutual recognition of professional qualifications, where explicitly provided. The PC and the Committees are also the forum for consultations on disputes before an arbitration panel can be established. The EU is approaching implementation of the TCA by involving the European Parliament closely. Due to the law-making role of the PC, this written evidence recommends that the EU and the UK utilise the mechanisms for transparency, accountability, and scrutiny to their full extent. This includes consistent publication of decisions and recommendations, holding meetings in public, and involving civil society, business, and parliaments proactively. The establishment of the Parliamentary Partnership Assembly with the European Parliament would enable Parliament to empower itself in relation to decisions made under the TCA. 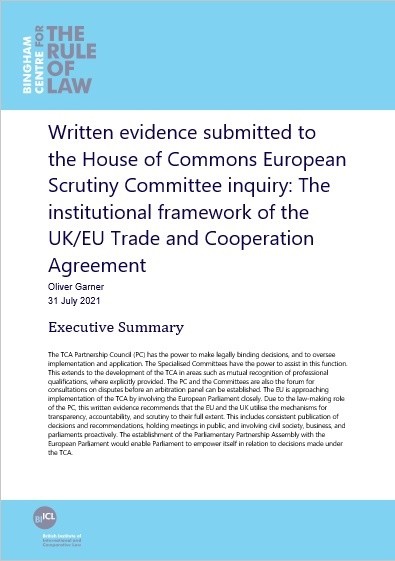