The UK Government recently invited submissions of evidence on the proposed COVID-19 vaccine certification regime which may be introduced as part of the Government's "Plan B scenario." We submitted evidence addressing the final question in the consultation document, which was an open-ended call for any comments relating to the consultation. We did not aim to evaluate the merits of the Government's proposed policy on vaccine certificates. Instead we showed why, from a Rule of Law perspective, there is a need for primary legislation regulating the use of Government-mandated COVID-19 vaccine certificates for venues and events, in the event that the Government decides to adopt such a scheme.

We also submitted the attached PDF to the Department of Health, which expands upon the 500 word summary of evidence provided in the consultation document.

The introduction of a Government-mandated COVID-19 vaccine certification scheme for venues and events will have a significant impact on businesses and individuals, and there are concerns that any scheme may be discriminatory and infringe upon individuals' rights. The use of vaccine certificates involves the processing and digital storage of many individuals' health-related personal data, raising privacy and data protection issues, which require careful consideration. The collection, storage and use of health data falls under the right to privacy protected by Article 8 of the European Convention on Human Rights ("ECHR"). It is likely that other rights and freedoms protected by the ECHR will also be engaged if a mandatory COVID-19 vaccine certificate scheme is introduced. For example, the ECHR protects freedom of assembly (Article 11), the right to practice one's religion (Article 9), and the enjoyment of the rights and freedoms under the ECHR without discrimination (Article 14). It is constitutionally inappropriate for a policy with such wide-ranging potential impacts to be introduced via delegated legislation. Parliament would not have sufficient opportunity to scrutinise, debate, and amend Government proposals.

The Government states that vaccine certificates may need to be implemented "at short notice in response to concerning data". We emphasise that Parliament can pass primary legislation rapidly where circumstances require it to do so. For example, the Coronavirus Act 2020 passed through Parliament in four sitting days.It is not only the Bingham Centre that believes mandatory vaccine certification should be introduced via primary legislation. The Public Administration and Constitutional Affairs Committee ("PACAC") expressed concern in its Covid-Status Certification report that the Government may be attempting to avoid the appropriate levels of public scrutiny by introducing a COVID-19 vaccine certification scheme through delegated legislation. PACAC stated: "Given that the Government has not made the scientific case for a Covid-status certification system, and in its own assessment the case is 'finely balanced', the introduction of such a system must be by way of primary legislation. This would allow for the full implications and ramifications of the proposals to be fully and properly considered by the Government and would also allow Parliament the appropriate amount of time to consider, scrutinise and where necessary amend the Government's proposals".

We endorse and echoe PACAC's recommendation that any Government-mandated COVID-19 vaccination scheme should be brought into force via primary legislation. 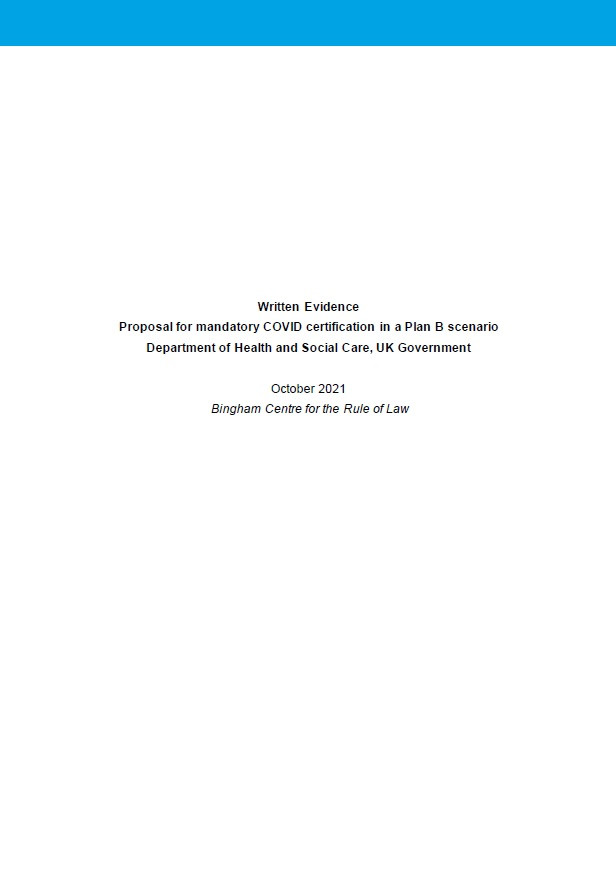