Government Amendments to the Police, Crime, Sentencing and Courts Bill: A Rule of Law Analysis

On 15 November 2021, the Government introduced 18 pages of new proposed amendments to the Police, Crime, Sentencing and Courts Bill. By this time the Bill had already completed its initial passage through the Commons and had reached committee stage in the Lords. The Lords have had no substantive time to scrutinise the new amendments, and the House of Commons has been almost entirely bypassed.

The Rule of Law protects the supremacy of the legislature over the executive. It also requires the process for enacting law to be transparent, accountable, inclusive and democratic. Parliament must have sufficient time to scrutinise and debate proposed changes to the law, and the executive must abide by constitutional norms governing the legislative process. One such constitutional norm is that amendments should not normally be tabled in the Lords after second reading, as this does not allow the Lords sufficient time for scrutiny and avoids any meaningful scrutiny by the democratically elected House.

The new amendments require proper scrutiny. They make substantial and controversial changes to the law governing the right to protest, including some which raise significant Rule of Law issues. All the amendments interfere with the rights of freedom of expression and freedom of assembly protected by Articles 10 and 11 of the European Convention on Human Rights ("ECHR"). Any restrictions on the rights protected by Articles 10 and 11 must be a lawful, necessary and proportionate response to a legitimate aim, and it is questionable whether these amendments satisfy that requirement. If the restrictions are challenged under the European Convention on Human Rights, the lack of proper democratic scrutiny by Parliament will be taken into account by the European Court of Human Rights and will weigh against any argument the Government wishes to make that the restrictions are within the UK's margin of appreciation.

Summary of amendments and examples of specific Rule of Law concerns

• Amendments 148 and 149 create the offences of "locking on" and "being equipped for locking on". The threshold for conviction is very low and raises Rule of Law concerns around the certainty and foreseeability of the law.

• Amendment 150 will significantly increase the penalty for wilful obstruction of the highway from a fine, to up to 51 weeks imprisonment. It is not clear that such an increase is justified.

• Amendments 151- 153 introduce a variety of new offences in relation to the obstruction of major transport works, and the interference with the use or operation of key national infrastructure. A number of these offences are incredibly broad and unacceptably vague, leading to Rule of Law concerns regarding legal certainty and the foreseeability of the law.

• Amendment 154 expands existing stop and search powers to cover protest-related offences, and amendments 155-158 create a new suspicion-less stop and search power. The police are given an extremely broad discretion to conduct stop and searches, raising Rule of Law concerns around the potential for the arbitrary and discriminatory exercise of police power.

• Amendment 159 creates a new type of civil order, a serious disruption prevention order ('SDPO'), which can be imposed with or without a conviction. The imposition of an SDPO on individuals who have not committed a criminal offence seems hard to justify. In addition, the threshold for the imposition of an SDPO lacks legal certainty and foreseeability. It is also concerning that the SDPO regime gives the police an extremely broad discretion to request the imposition of wide-ranging restrictions and requirements. Finally, the Secretary of State is given a power to "issue guidance" in relation to SDPOs, to which the police "must have regard". The Bill does not include sufficient safeguards to prevent the guidance being used to restrict protest rights in an arbitrary manner. 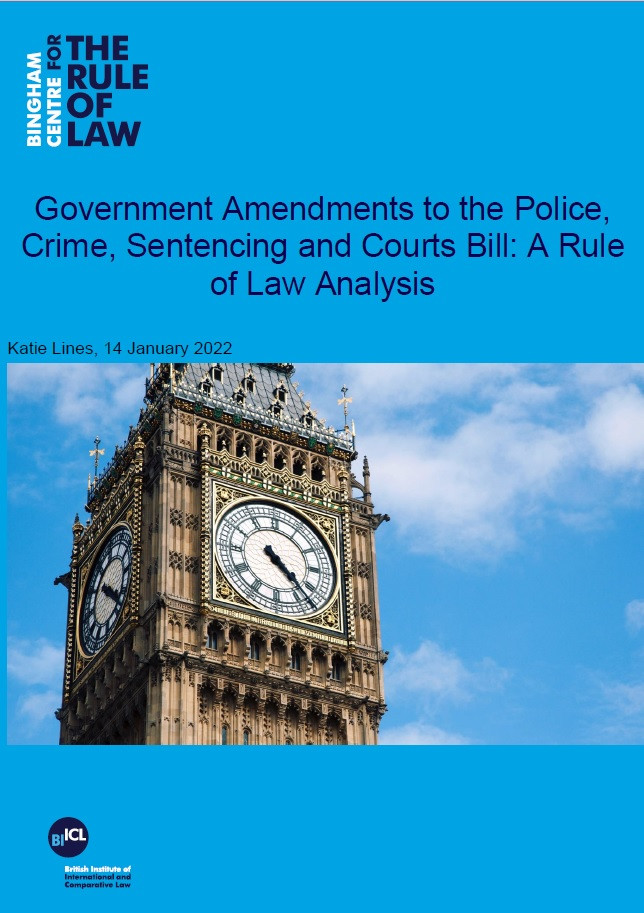