18 Months of COVID-19 Legislation in England: A Rule of Law Analysis

We recognise that the Government has often had to act quickly to respond to an unprecedented public health crisis. However, the Rule of Law should not be set aside during a national emergency, but should instead form a core part of a state's response to that emergency. Sustained compliance with the Rule of Law during a pandemic can actively assist "an effective pandemic response by promoting transparency, clarity, participation, engagement and representation, international cooperation, equality, accountability and anti-corruption, among other principles".

In this Report, we find that:

• The Government is still failing to provide Parliament with impact assessments for coronavirus legislation, meaning that Parliament has often not had the information it needs in order properly to scrutinise measures which have profound social, economic and health impacts.

• The Coronavirus Act 2020 received very little parliamentary scrutiny when it was made, and the mechanisms for ensuring post-legislative scrutiny and accountability have been largely ineffective. Every six months the House of Commons can choose whether the Act should continue to be in force. However, this is an all or nothing event: Members can either approve the continuation of the Act as a whole or vote to expire it. They cannot amend or expire individual provisions. Voting to expire the Coronavirus Act would have such significant practical and political consequences that the Commons only really has one option in practice: to vote to continue the Act. In addition, insufficient time has been allocated to the renewal debates, which has limited the House of Commons' ability to provide effective post-legislative scrutiny of the Act.

• The Government has continued habitually to use unamendable, delegated legislation to introduce measures which substantially affect people's everyday lives and criminalise ordinary behaviour. We query the necessity of using delegated - rather than primary - legislation to implement significant policy changes after the initial crisis stage of the pandemic had passed.

• In the first six months of the pandemic there was widespread concern at the Government's use of the urgent procedure to make regulations that came into force before they had been debated or approved by Parliament. The Government has made positive changes in response to this criticism, and has ensured that Parliament has had the opportunity to debate and approve in advance of implementation most of the major, national coronavirus measures. However, the Government continues to use the urgent procedure to accelerate standard parliamentary timescales. Again, we query the need for the Government to prioritise an urgent response over proper parliamentary scrutiny at this stage of the pandemic.

Accessibility and clarity of coronavirus legislation

• New coronavirus laws have continued to come into effect at very short notice, even when there does not seem to be a need for an urgent implementation of the new law. This makes it virtually impossible for individuals and businesses to get fully up to speed on their rights and responsibilities before new legislation comes into force.

• Many significant coronavirus laws are still being introduced via amending regulations. Because these amending regulations have been introduced at very short notice, a consolidated version of the original regulations - incorporating the amendments - has not always been publicly available by the time the new laws have come into force. This makes it very difficult to make sense of how the law has changed.

• The Government has continued to portray its public health advice as having the force of law. This has caused confusion among the public and the police, and has resulted in police forces acting beyond their powers by enforcing Government guidance rather than the law.

We conclude that, in general, the Government's response to Rule of Law concerns raised at the six-month mark of the pandemic has been limited. During the first six months of the pandemic, the Government centralised power in the executive in order to respond quickly to the developing public health emergency. We recognise that the Government needed initially to prioritise a rapid response to the emerging COVID-19 pandemic, and centralised executive power enabled them to do that. However, Ministers appear to have grown accustomed to the ease with which laws can be made when the Government has enhanced legislative control, and seem reluctant to relinquish law-making functions back to Parliament now that the urgency of the initial stages of the pandemic has passed.

There is an urgent need to distil the lessons we have learned in the last 18 months about the extent to which our current legal framework and institutional arrangements are able to ensure that our response to public health emergencies is also compatible with our commitment to the Rule of Law. 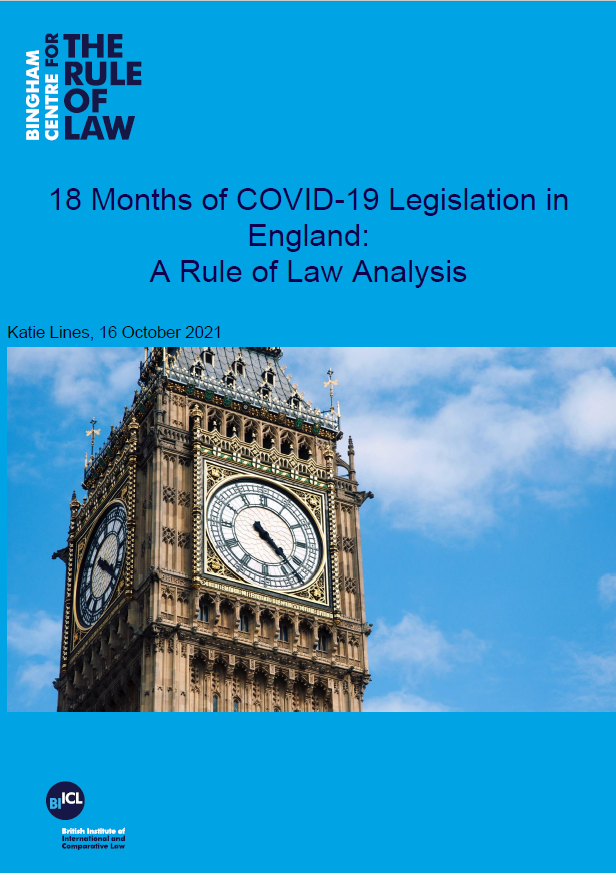