The Health Protection (Coronavirus, International Travel) (England) (Amendment) (No. 7) Regulations 2021 (SI 2021/150) ("the Regulations") were made on 12 February 2021, and came into force at 4am on 15 February 2021. The Regulations amend four existing sets of regulations governing international travel. The most notable change made by the Regulations is the introduction of a system of hotel quarantine for travellers who have visited or passed through a "red list" county in the 10 days before arriving in England. This report scrutinises the Regulations from a Rule of Law perspective and is intended to inform members of the House of Lords when they debate Baroness Thornton's regret motion on Monday 22nd March 2021.

The Regulations are subject to the made negative procedure. We query whether the very limited parliamentary scrutiny afforded by the negative procedure is an appropriate way to introduce the powers contained in these regulations. The Regulations create a system of mandatory quarantine backed by criminal sanction, give the police the power to enter people's homes, and allow individuals to be detained, searched, and their belongings seized: these are not minor changes to the law. In addition, the Regulations were laid before Parliament less than three days before they came into force. This is a breach of the parliamentary convention that a negative statutory instrument will not come into force until 21 calendar days after it has been laid. The fast-tracking of the Regulations also meant that individuals and businesses affected by hotel quarantine had less than one working day to get to grips with the detail of the scheme, raising several Rule of Law concerns surrounding the accessibility and foreseeability of the law. We query the nature of the urgency that led to the Regulations being brought into force so quickly after they were made.

We also consider the accuracy of the Government's warnings that a traveller who lies about having visited red list country may face up to 10 years imprisonment, and conclude that the Government's messaging has been misleading. Misleading statements of the law undermine the Rule of Law by creating confusion about what the law is.

It is an elementary principle of the Rule of Law that anyone exercising a statutory power must not act beyond the limits of that power. The Secretary of State's ability to charge people for staying in a quarantine hotel appears to breach the International Health Regulations 2005, and may be ultra vires the parent act as a result.

The Rule of Law also requires measures introduced in response to an emergency to be necessary and proportionate to the situation. It is difficult to assess the proportionality of the Regulations as the Government has not conducted an impact assessment, nor explained the scientific rationale underpinning the hotel quarantine policy. Nonetheless, we have attempted to identify provisions within the Regulations which should be most closely scrutinised to ensure that they are necessary and proportionate. In particular, there should be scrutiny of the necessity and proportionality of:

• the strictness of the quarantine measures, which may amount to a deprivation of liberty under Article 5 ECHR and/or common law imprisonment;

• the power of entry granted to the police;

• the powers to detain and search travellers;

• the cost of a stay in a quarantine hotel (if charging for quarantine is intra vires); and

• the creation of new offences.

Finally, the Rule of Law requires laws to be non-discriminatory in their effect, and we are concerned that the Regulations do not appear to make adequate provision for individuals who are unable to stay in a quarantine hotel because of a disability. 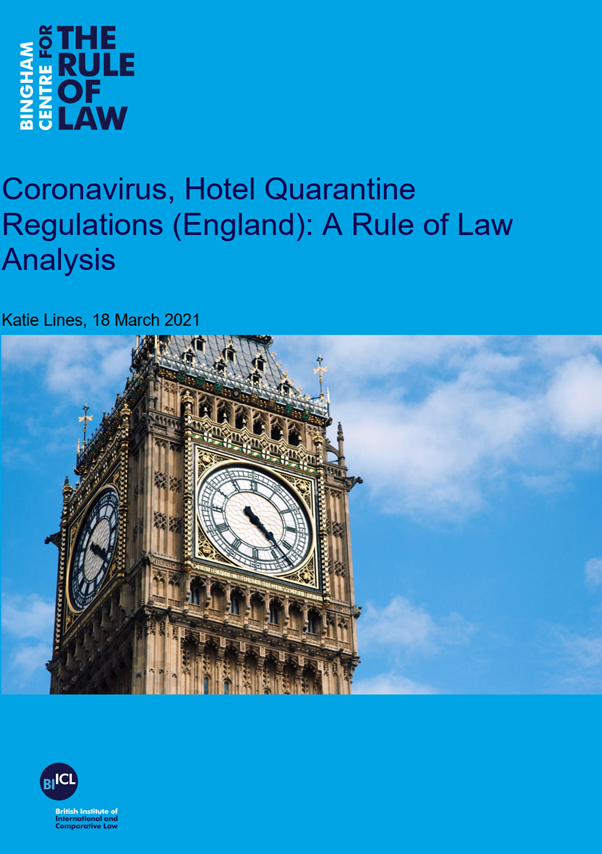