The EU-UK Future Relationship and the Rule of Law

The EU and the UK have begun negotiating their future relationship. The two sides disagree over the structure of the agreement(s), the legal form of any commitments to maintain common standards, and dispute resolution. Each of these disagreements highlights the unprecedented nature of these negotiations: this is the first time the EU has negotiated an international agreement with a state after it has withdrawn from the EU through Article 50 TEU .

The condensed timetable for the negotiations, which must be concluded before the end of the transition period on 31 December 2020, means that both the UK and the EU are under political pressure to find legal compromises quickly. The combination of the legal complexity and the political pressure of these negotiations means that there is a risk that Rule of Law values will be overlooked.

Article 218 of the Treaty on the Functioning of the European Union (TFEU)  prescribes roles for the EU institutions throughout the negotiations. However, time-pressure, uncertainty over whether the agreement falls under EU exclusive competence  or shared competences  with the Member States, and the unique context of negotiations with a former Member State risk undermining these channels for political and legal scrutiny.

If the proposed agreement falls under shared competences it may require consent at the Member State level in addition to the approval of the Council of the European Union and the European Parliament. It is unclear how the existing timetable could allow for effective scrutiny in the time available. Furthermore, the complexity of the agreement(s) means that a CJEU Opinion on compatibility with the treaties under Article 218(11) TFEU  could be needed before it comes into force.

The UK Government has set out a clear negotiating position, but it has not set out in detail the role that Parliament will play in the process. Parliament only has a limited formal role  in the process of negotiating and approving the future relationship agreement(s). In the absence of a formal role, it would be helpful if the Government could outline what it intends to publish with sufficient notice. This would allow committees to plan their roles in the scrutiny process. Parliament can play a vital role in facilitating the accessibility and public scrutiny of the negotiations.

The Council's negotiation mandate  envisages ad hoc arbitration to resolve disputes when the parties cannot reach a political solution through the joint governing body established for the agreement(s). The EU position is that there must be a mechanism for the arbitration panel to refer issues concerning the interpretation of EU law to the CJEU. Otherwise there is a risk that the arbitration panel would provide alternative interpretations of EU law undermining its uniformity.

The UK Government, however, rejects such a mechanism due to its desire for complete domestic autonomy  over the creation and application of law. Any compromise must ensure that there is certainty and clarity over the interaction of EU law and any future relationship agreement(s).

The UK Government has rejected the EU's calls for a 'level playing field' for taxation, labour rights, and environmental standards. This divergence agenda engages a number of Rule of Law standards. At present it is unclear to what extent the UK plans to use any right to diverge immediately after the end of transition. The EU (Withdrawal) Act 2018  means that the legal default in most areas will be static alignment. Policy decisions to diverge must take place through the primary legislative process subject to proper parliamentary scrutiny.

Avoiding a cliff edge at the end of transition

The conclusion of a new legal relationship between the EU and the UK before 31 December 2020 will require enormous political will and negotiating skill. Despite the time-pressure, it is in the interests of the Rule of Law that compromises are made to secure agreement. As the European Parliament  has warned, if there is no agreement contingency measures and the international framework may be insufficient to prevent severe disruption. 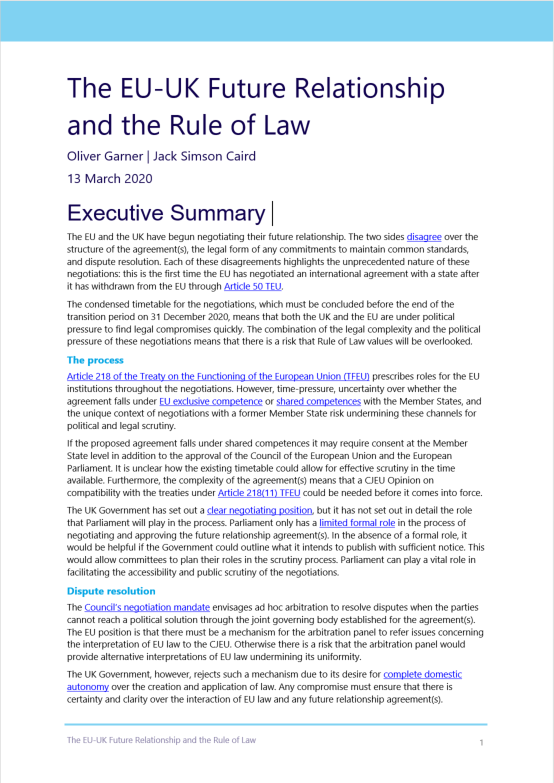