The Withdrawal Agreement and the Political Declaration: A Preliminary Rule of Law Analysis

The Rule of Law, a central principle of the UK's uncodified constitution, provides a set of minimum standards that can inform both the process and substance of Brexit. The final six months before exit day are unlikely to provide ideal conditions for effective parliamentary scrutiny. However, it is vital that parliamentarians ensure that the Rule of Law implications of the legal and legislative changes proposed are scrutinised.

There are a number of steps that the Government could take in order to enable the Rule of Law implications to be identified in Parliament. The first is to publish an explanatory memorandum on both the Withdrawal Agreement and the Political Declaration on the Future Relationship which sets out their respective legal and legislative implications. The second is to publish a draft of the EU (Withdrawal Agreement) Bill at the same time the Withdrawal Agreement and the Political Declaration are laid in each House. The third would be to set out the role that Parliament will play in negotiating, approving and implementing the Treaty on the Future Relationship between exit day and the end of the transition period.

The Withdrawal Agreement will cover a number of major issues: Citizens' Rights, the Protocol on Ireland and Northern Ireland, the transition period and the role of the Court of Justice of the EU (CJEU). To deliver on the content in the Withdrawal Agreement, the EU (Withdrawal Agreement) will contain constitutional provisions designed to empower the courts and attempt to entrench Citizens' Rights. In relation to the practical arrangements for Citizens' Rights, parliamentarians will need to be able to identify how the protections for EU citizens will be delivered. In particular, there are uncertainties surrounding free movement rights for certain non-EU nationals and the extent to which UK nationals and their family members residing in an EU Member State will be permitted to move to other EU Member States to live or work. In addition, it is unclear whether and to what extent the UK Government intends to legislate to secure equal treatment for EU citizens living and working in the UK. Reciprocal arrangements will likely be required in the domestic legislation of other EU Member States.

The Government's White Paper on implementing the Withdrawal Agreement indicates that the legal basis for transition is likely to require the adaptation of the EU (Withdrawal) Act 2018. The transition period will create a second exit day, when the major domestic legislative changes relating to Brexit will take effect. Legal certainty will require that the Government sets out, at the earliest possible opportunity, how it will prepare for the effect of the end of transition, on 31 December 2020, in the statute book.

When the Withdrawal Agreement is presented, it will be important to identify the role of the CJEU in interpreting and resolving disputes about the Agreement itself. The CJEU's role as the authoritative interpreter of EU law will ensure that it continues to play a role after exit day. But Parliamentarians must ensure that the CJEU's role in the new institutional framework within the Withdrawal Agreement is properly confined to the interpretation of EU law, and that an independent and impartial tribunal will decided on disputes about the agreement itself.

The Political Declaration on the Future Relationship is a political agreement. It will provide a basis for the formal negotiations on the Future Relationship that will begin after exit day. The UK has argued that the Withdrawal Agreement should contain a provision committing the UK and the EU to giving effect to the contents of the Political Declaration. It is imperative that the Government clarifies the legal implications of approving the Political Declaration. Parliament must ensure that the full implications for the legislative process nature are properly spelled out, including outlining how legislation that has already been enacted might be used.

The nature of the Political Declaration may mean that domestic legal and constitutional implications of the agreement are difficult to establish. The Government's White Paper on the Future Relationship sets out that the UK would remain aligned with certain elements of EU law. Any proposed common rulebooks could result in parliamentarians having less control over legislation originating in the EU than they have now. Any new institutional relationships with the EU will need to be carefully scrutinised to ensure that they provide adequate parliamentary oversight of new legislation that enters the UK statute book. 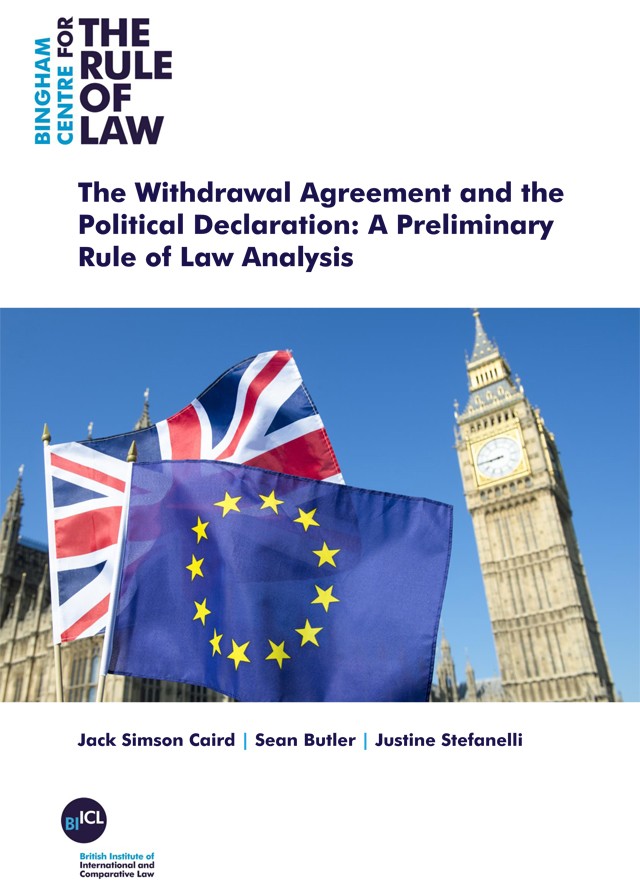